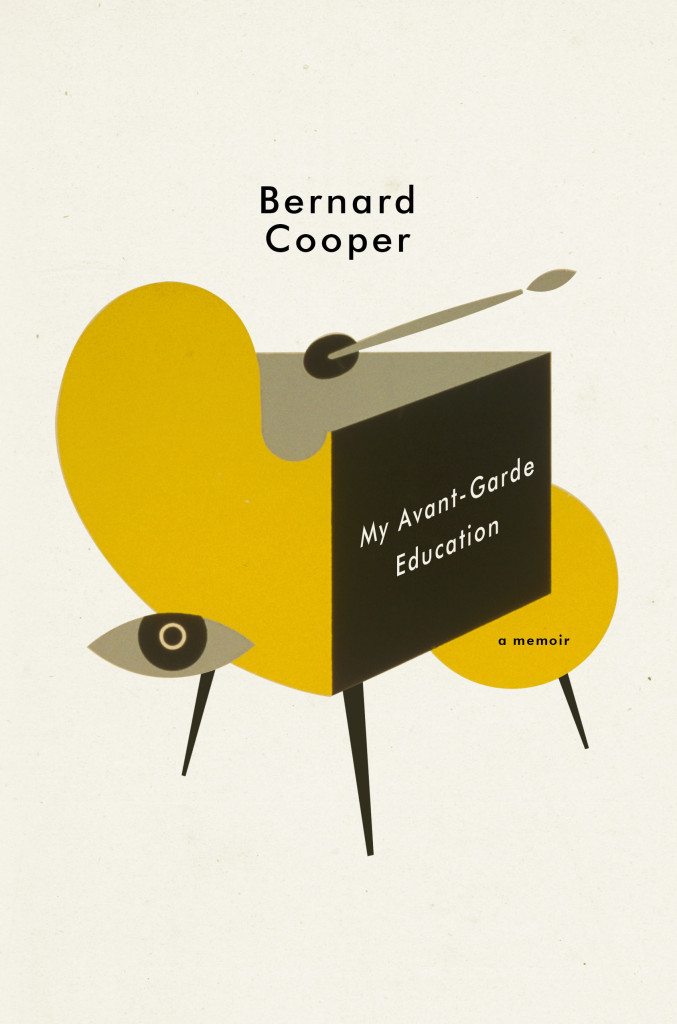 Bernard Cooper is among my most favorite writers for his fearlessness, his honesty, his grace. He has written eloquently about subjects many of us can find few words for and now he’s turned his eye onto his own coming of age in the world of Cal Arts—an epicenter for art, creativity and a kind of highly intellectual absurdity. Cooper brilliantly captures what it is to awaken to one’s creative self and the need to find what is one’s own in terms of intellectual and personal identity while making sense of the world that surrounds.”–A.M. Homes

The paradox of making something from nothing, of threading the maze of reality, is finely illuminated in this honest, articulate and moving memoir.  Through his search for the avant-garde, Bernard Cooper found something rarer, a wisdom grounded in humility before unanswerable questions.  In doing so, he has achieved a combination of “Beauty plus pity,” Nabokov’s definition of art.                — Phillip Lopate

Pop Art, for the young Bernard Cooper, was Everything: a world to enter, a way to elevate the cultural litter of 1960s America to a new form of beauty, an escape from grief, a place to hide. Cooper loves the oddball artists who people these pages, but never loses his cool, incisive eye. Refreshingly funny and very much alive, this memoir’s a brilliant study of the quake-shaken, make-it-up-as-you-go landscape of our most American city, and a deeply engrossing account of how one boy made a self while making art.                    –Mark Doty

Bernard Cooper can make dryer lint fascinating–and in this hilarious yet poignant memoir of an avant-garde life, does.”        —Sandra Tsing Loh

PRE-ORDER My Avant-Garde Education from these booksellers NOW. 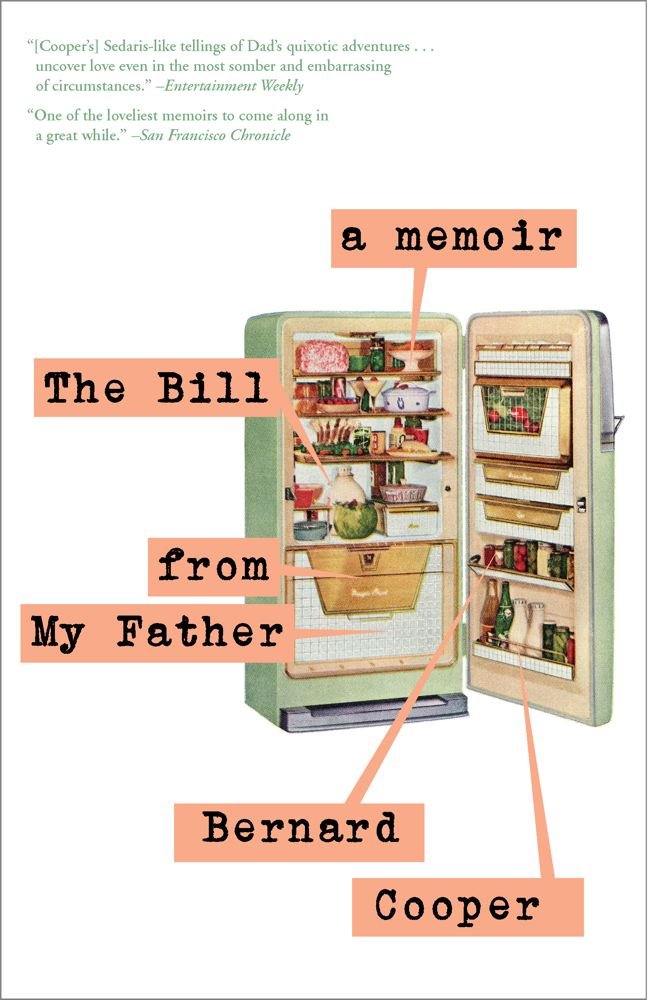 The Bill From My Father

From Publishers Weekly
Cooper, whose Maps to Anywhere won the PEN/Ernest Hemingway Award, crafts a brusquely tender elegy to his baffling father, Edward, who died in 2000 (the book’s title refers to an itemized bill of expenses incurred from upbringing and mailed from father to son). Edward was a blustery Los Angeles divorce lawyer with a flair for drama in and out of court. Circling from recent to distant past, Cooper recalls his utter bewilderment at his father’s ill-advised imbroglios, which included an affair with his father’s evangelical nurse and a lawsuit against the phone company. With a sharp scalpel of detail, Cooper dissects his father’s stinging dismissals and unceremonious reconciliations with his sole surviving progeny, laboring to slice away a mystique that “ballooned into myth” in Edward’s sustained absences. Dear old dad never bothered to read his son’s prize-winning work, in which he figures prominently—though it’s clear that father and son share a linguistic legerdemain. Stirring yet never saccharine, this memoir excavates a fraught history without once collapsing into cliché. As much as Cooper seeks truth, he finally grows comfortable in the shadowy depths of his father’s legacy. “By delving into the riddle of him, I hoped to know his mystery by finer degrees.” 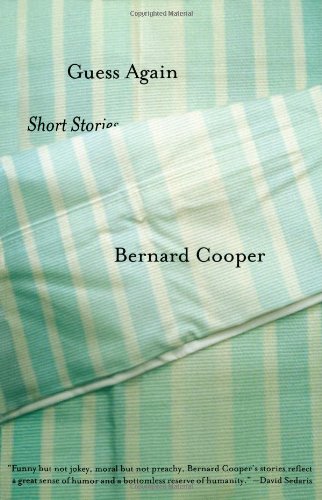 From Publishers Weekly
This respected essayist’s (Maps to Anywhere) fiction debut contains 11 exquisitely crafted stories, most previously published in such prestigious literary journals as Ploughshares, the Paris Review and the North American Review. Although many of the central characters are gay, the themes presented here are universal: love, loss, sexuality and aging parents, with the occasional specter of AIDS hovering on the periphery. Cooper handles all with compassion and bittersweet humor. In “Hunters and Gatherers,” a Mormon husband and his wife attempt to reconcile his bisexuality with their faith by holding a bizarre dinner party for the few gay people they know. “What to Name the Baby” finds Laura, young and unmarried, unexpectedly giving birth while traveling in a cramped Winnebago with her father, Frank, and his gay lover. One year later, Frank keeps a promise to show the baby the redwoods, but “huddled in the midst of a green indifference,” the baby is more interested in the loved ones gathered about her than the magnificent trees. In the opening story, “Night Sky,” a man dying of AIDS visits his ex-wife, who is under house arrest for vandalizing her new ex-husband’s property. At the end, they forgo their problems of the present for the larger picture: “But for now we lay back on a stranger’s lawn, pointing to what we guessed were red dwarfs, stars formed long before the earth, their matter decaying so slowly it defies all measure of time.” Cooper’s love for his characters is evident in their self-deprecating humor and the poetic imagery of his writing. 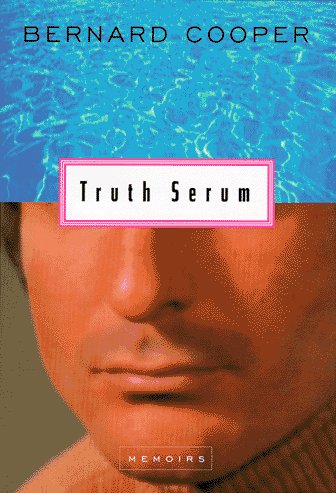 From Kirkus Reviews
A riveting, masterfully crafted memoir by essayist and novelist Cooper (A Year of Rhymes, 1993, etc.) that should find a wide readership beyond the gay market. Really a sequence of autobiographical essays, the book mostly concerns how Cooper’s experience of being gay has affected him throughout his life. The life in question is superficially ordinary: Cooper grew up middle-class and vaguely Jewish in Los Angeles in the ’60s, the only child of a divorce lawyer and a housewife; he went to college and eventually began teaching literature. Although chronologically ordered, the chapters sometimes leap decades to draw thematic connections and reinforce emotional epiphanies. At the end of a chapter about his childhood entitled “Imitation of Life,” for instance, Cooper recalls strolling West Hollywood’s exuberant gay strip one night in his 25th year at the moment that, unbeknownst to him, his mother died in bed. Capturing perfectly the simultaneous tragedy and thrill of the moment, he concludes with heartbreaking grace: “The night was warm, impending, alive, as if longing itself were an aspect of the air, like humidity or wind.” Cooper’s tales of youth, particularly one about disposing of a cache of pornography, can be very funny as well as psychologically astute. When he covers common markers of the gay experience, from adolescent crushes and coming out to therapy and the gym, he avoids clich‚s entirely; several splendid passages, such as one about an affair with a stand-up comic who gradually spiraled downward into mental illness, read like tragicomic fiction. Great set pieces abound, as when he and his widower father find themselves equally incapable of open discussion about their romantic lives. And Cooper’s account of how AIDS has entered his life is as honest and unsparing as any yet written. Recalling his impressions with what feels like uncanny accuracy, Cooper at once inhabits his memories and reshapes them with detachment. This is exhilarating writing. 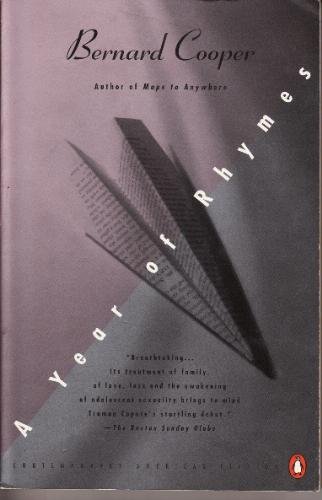 A Year of Rhymes

Annie Dillard calls Bernard Cooper “one of our most exciting new writers.” Ann Beattie describes his work as “dazzlingly luminous.” Now, in an extraordinary first novel, Cooper focuses, with clarity and tenderness, on two characters introduced in his PEN/Hemingway Award-winning book, Maps to Anywhere. Bruno Schultz said that images from childhood were like “filaments in a solution around which our senses of the world have crystalized.” A Year of Rhymes consists of a succession of these images, these vignettes which, though limited and particular, add up to a single year, and movingly and convincingly convey an entire fictional childhood. The time is the 1950s; the place southern California. The story is told by Burt, a boy whose older brother, Bob, is a private detective who works for their father, Irving Zerkin, a divorce attorney. Their relationship is close, special, and the story is as much a mystery – though the mystery is that of sexuality – as it is a coming-of-age. Burt witnesses his brother’s involvement with two girlfriends: the seductive and eccentric Marion Hirsch, whose maturing artistic ambitions and skewed humor fascinate the entire Zerkin family, and Janet Cotter, the phlegmatic but steadfast Baptist nurse upon whom the whole family depends when Bob becomes ill with leukemia. Though Burt is exposed to the vicissitudes of adult love through his brother and his parents, Burt’s most compelling realization is his burgeoning physical attraction to men. He must begin to learn to negotiate his own desire in the course of this year, the final year in his brother’s life. He learns that the body is both an object of desire and subject to decay. And with the help of his brother, and Marion and Janet, he must contend with the equally difficult mysteries of love and loss. 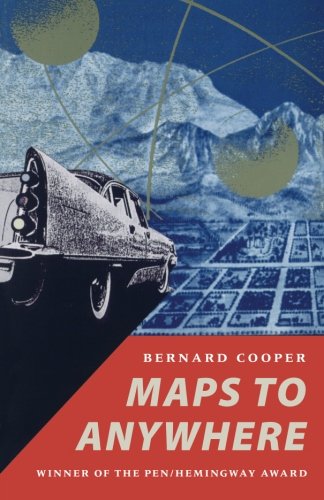 From Publishers Weekly
As its title intimates, this set of essays captures the open-ended, rootless feel of modern life. Cooper, whose writings have appeared in Harper’s and Grand Street , lets his imagination play freely over sundry topics–barber poles, learning to draw, modern architecture, dinosaurs, photography, Joseph Smith and the Book of Mormon, being childless. Growing up in Southern California, he dreamed of utopias while his “home life resisted perfection.” From his father, and from the taste of horseradish, he learned that pleasure can merge with pain. He writes movingly of his brother dying of leukemia, and of his hyperenergetic, eccentric father, a lawyer who took on odd cases. Cooper’s ironic tone is at once self-deprecating and subverting of the reader’s preconceptions. Autobiographical fragments, prose poems, spiels and mini-essays crafted with precision are dazzling, elusive shards in this jigsaw.